The Hunt for Yellow October 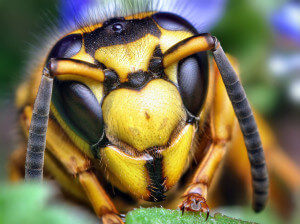 The 1990 blockbuster  film, The Hunt for Red October based on the novel by Tom Clancy pits CIA  agent, Jack Ryan against Russian submarine Captain Marko Raminus. During the last week of present day October, it occurred to me that  my fruitless search following the flight path of a yellow jacket was a bit like Ryan tracking the defector nuclear submarine across the bottom of the ocean.  In other words-fruitless. To add to the drama, it was thundering and starting to rain and not possibly one of my brighter ideas.

The Yellow Jackets have been prolific and persistent this fall. There are many varieties of yellow jackets all belonging to the wasp family(Vespidae). The strain I’ve been hunting through late October is the Western Yellow Jacket also called a known as the ground bee. This particular variety often nest in abandoned mice holes.  The Yellow Jackets dig to expand their new-found home from a two inch opening up to an average internal diameter of two feet.

A yellow jacket hive starts with a solitary mated queen. She will build a nest using chewed up wood pulp or paper, lay eggs and rear the brood as a single mother. Once the first generation of brood reach adulthood, they will take on the duties of expanding the nest and caring for further offspring as the queen goes about the business of laying eggs. Yellow Jacket nests are annual and the population will rapidly expand to five thousand workers by late summer. The queen produces both worker and reproductive offspring and can lay as many as ten to fifteen thousand cells in a season.  As the summer wans, the  newly mated female offspring will start storing up fat and leave the nest in order to find her own burrow to hibernate through the winter.  These new queens will emerge in the spring to repeat the cycle all over again. Meanwhile the workers and oftentimes the original queen are left to die off as the ground temperature drops below freezing.

This rapid explosion of adult brood population equates to pesky flying guests who show up uninvited to fall cookouts or outdoor cocktail hours. One of my friends was recently stung  by yellow jackets in an unmentionable area while sipping champagne in the hot-tub.  Not to name names but you know who you are.  Just saying…, Theresa!  Yellow Jackets have a lance-like stinger and can and will sting repeatedly.  Venom toxicity is equal to that of a bee sting and can produce severe allergic reactions.

My ongoing battle with these pests started earlier this summer with the yellow jackets robbing the hummingbird feeders,  The hummingbirds seemed more than able to drive the away so my response was just one of annoyance.

The Yellow Jacket’s thievery began to heat up once I replaced the honey supers on the bee hives with fall feeders in September.  What started out as mere annoyance quickly escalated into all out war between the bees, the yellow jackets and myself.

And so I found myself tracking the path of this persistent, pesky critter in the rain hoping to stumble upon a tiny hole in the ground and feeling rather foolish in an futile attempt to protect the feed supply of my bees. 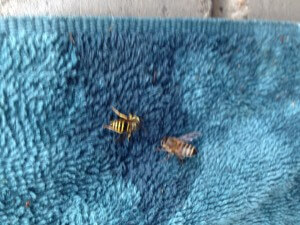 Despite my best attempt, the yellow jacket’s nest remains undetected so, my solution is to add more feed and kill (drown) them with kindness. 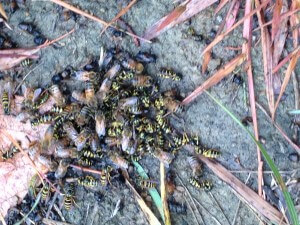 Last night was the first hard, deep freeze, a low of 16 degrees.  So, farewell my little yellow-striped nemesis until next year!