“H” as in Honey and Hospitality

Calvin Trillin, Kansas City’s nationally known food critic, once quipped, “I’m in favor of liberalized immigration because of the effect it would have on restaurants. I’d let just about everybody in except the English.”

Trillin may have betrayed some local historical ignorance since it appears he was unaware that it was Fred Harvey, a Brit, who brought culinary acclaim to the Heart of America. After emigrating from England and settling in Leavenworth, Kansas shortly after the Civil War, Harvey created the entire concept of combining fast food with fine dining. His marketing skill and management style has had a lasting impact on all aspects of the hospitality industry, initially between Kansas City and the southwestern reaches of the United States, and ultimately on the entire world. 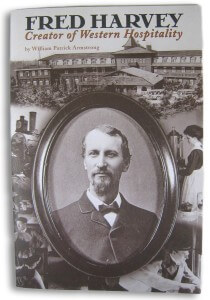 After years of traveling on a variety of American railroads and suffering the discomfort and inconvenience of such travel combined with poor quality of food and service in the depots, Harvey was convinced that good food served promptly with fine presentation would be welcomed by the ever expanding number of rail travelers.

His success turned his name into a brand that was so strong that “Fred Harvey” was the actual and only name of the company that operated from offices near Kansas City’s Union Station at the turn of the century and included (at one time or another) some 65 restaurants and lunch counters, 60 dining cars and a dozen hotels and retail magazine and book stores that also featured picture postcards. 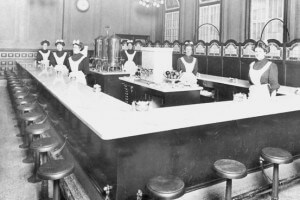 Harvey’s insistence on providing a positive experience for his dining customers began with the staff. He hired the best chef he could find to create his menus and train kitchen staff. Tableware, flatware and linen of the finest quality were imported from Europe. At the suggestion of one of his top managers, he created a group of well-trained, disciplined women to serve the customers who became known as the Harvey Girls, whose place in cinematic history was established in the 1946 movie starring Judy Garland. 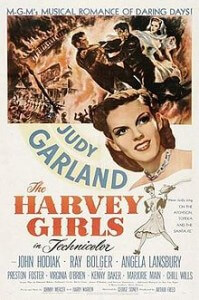 Harvey’s original idea was not immediately embraced by the owners of the railroads wending their ways westward from Kansas City. It was a small trunk line called the Atchison, Topeka and Santa Fe with which he struck his deal that set the standard for food service in the depots and George Pullman with whom he struck his deal to create the international standard for on-train dining. 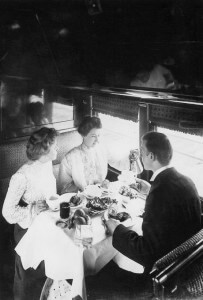 The National Fred Harvey Museum is located at 624 Olive Street in Leavenworth. Among the items for sale are books that include recipes created for the original Harvey House restaurants as well as historical accounts of the man and his achievements. Perhaps the best of the bunch is Appetite for America by Stephen Fried (also currently available on line at an attractive discount). In addition to biographical information on Harvey, this book shares insight on how the railroads were instrumental in the creation of time zones in the United States and why the word “the” was added by Johnny Mercer to the lyrics of the song immortalizing the name of Harvey’s railroad partner. “Cause lots o’ them been travelin’ for quite a spell, all the way to Cal-i-forn-i-ay On the Atchison, Topeka and the Santa Fe.”

While one Kansas Citian, Calvin Trillin, may disparage the taste of the English. (“Even today, well-brought-up English girls are taught by their mothers to boil all veggies for at least a month and a half, just in case one of the dinner guests turns up without his teeth.”) There are thousands of people who were extremely happy to feast on the fare provided by another favorite son from England, Fred Harvey.

Fun read, and well written, but then i expect no less from this writer.

Absolutely Carl. Jake is always a wealth of information and wit!

Sonia, so glad you’ve checked in. Definitely next time. Know anything about beekeeping in Pakistan? Always looking for new ideas for the guest blog spot. Of course sharing some traditional recipes is another great option.

Having eaten in England, I stand by Calvin.

Funny you would say so, Calvin. I’d always thought the same about British fare. But, my two trips to England were a culinary delight. I had great food and a great time.

I enjoyed reading this post…well written and very insightful

Thanks Aqui, you know Jake, a wealth of information and always articulate.

Could hardly wait till lunch to read your blog today, it was a great read with my lunch.

Thanks Barbara, our dear friend is a fount of knowledge when it comes to K.C. history. I find the whole story fascinating myself.

Thanks Barbara, that really means a lot to me. Have a great lunch!

Thank-you Lloyd, I hope you will visit my blog often for more information about these amazing creatures.