There has been a lot of buzz in the media lately about international adoption. Stories that imply or outright claim that there is no real crisis for children living in orphanages worldwide. Stories like this one in the New York Times.

And I just wonder why they don’t talk about my kids. Why they assume all these phantom manufactured orphans are healthy, living in a happy and secure home and then “stolen” by baby brokers. Why don’t they talk about the children who are warehoused and neglected? The children who I lose a bit of my soul to every day?

My email box is filled with stories. Stories of children who are damaged by a broken system of care. Is adoption the answer? I don’t know what the answer is and I readily admit it. I do know that the children who are living in these systems TODAY do not have much time. They do not have the luxury of waiting while their countries, UNICEF or private aide groups “figure it out” and come up with a solution to cultural bias that children too dark or with an imperfection should be hidden or thrown away.

The first time I saw Ella’s photo I was stuck by the sadness in her eyes. Ella spent her days confined to her crib. At 3 years of age she was barely 15 pounds. Her hair was brittle and falling out from malnutrition.

Ella was the fifth child born to her mother. She was a normal birth, full term baby who scored a 9 on her APGAR. In the United States her mother would have had her pick of families waiting in line to adopt Ella. Instead, Ella was left in the hospital at birth. She was transferred to one of her countries large orphanages. In the orphanage she laid in a crib in a room of other, similarly discarded babies. Some of these babies were adopted domestically. In Ella’s country, a dark haired, dark eyed baby like Ella is unlikely to be adopted. Healthy, fair babies are deemed most desirable. With over 2000 infants domestically available for adoption each year and few families able to afford adoption Ella had little chance of domestic placement.

Ella’s daily life was a routine of 3 diaper changes per 24 hours. A bottle with a large hole in the nipple was propped in her mouth 3 times a day. A mixture of milk, white bread and sweet tea or watered down yoghurt is fed in these bottles. In her first year of life Ella suffered pneumonia from choking on feedings. She suffered urinary tract infections from sitting in soiled diapers for hours awaiting the next scheduled diaper change.

At age two Ella’s tiny body was so wasted that she began having heart arrhythmia. Her muscles were so weak she could not even roll over. She was not spoken to, held or fed from anything but a propped bottle. Ella did not speak, she did not babble, she rarely cried. Why cry when nobody responds? How do you learn to speak when nobody speaks to you?

When I looked at Ella’s file all I could think was that she would die alone. She would die without knowing the loving arms of a mother. Who would adopt a child that was so profoundly delayed? I marveled at her ability to survive. How could she have lived this long? 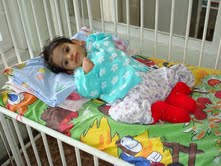 As with all the children who we have the opportunity to advocate for I began working to find that one possible family who would open their home to Ella. Six months after receiving her file I received a small update. Ella was showing a very slight improvement in her condition. She was being sat in the baby walker for a short time each day. The expression of pain and sadness remained. She was a child that was hard to look at without tearing up. Knowing that the layers of clothing were to mask that she had not gained even one ounce in the six months I had been searching for her family. 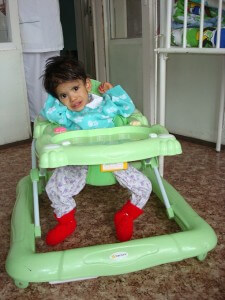 Eight months after seeing Ella’s photo for the first time I got the call. A family had seen my blog post about Ella and had been unable to forget her. I sent the family Ella’s medical and psychological reports. They read them and were undeterred. Ella was going to have a family! Now the paperwork began. The unfortunate reality of international adoption is that there is no way to get the children home quickly. There is no way to protect fragile children like Ella from remaining in their orphanage for months and even years while families wade through piles of paperwork and scrape together the large amounts of money that accompany it. Sometimes the fragile kids don’t make it. They die while waiting for their family to complete the adoption process. So we pray, and we hope and we press the officials and orphanage workers to try a little harder, to keep the fragile kids alive. 11 long months after “the call” and 19 months after I first saw her photo Ella was able to join her family. In this time Ella did not grow, she did not gain weight and she did not meet any developmental milestones.

SEVEN WEEKS after Ella was united with her family I received this photo. 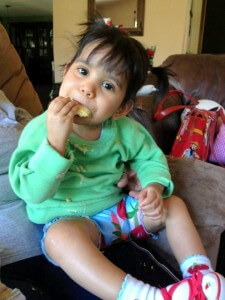 Ella had been cleared by doctors as having NO MEDICAL REASON for her delays or lack of growth. She had been gaining two pounds per week and was smiling, laughing and thriving. So the answer for this one small girl WAS adoption. For each child like Ella that finds a home there are thousands of broken children still warehoused and neglected. No “baby brokers” are involved and families receive not one dime for relinquishing them. Ella and the other “throw away children” are the real face of the orphan crisis and the real reason to fight to find a home for every child.

This post had me in tears. Ive talked with Nina a few times about helping us when we’re ready to adopt. Im so glad Ella has her hsppy ending.

Sam, you have no idea, the great work Nina does. I have an amazing follow-up story coming soon!

There are not words in this world that describe the work Nina does…. These Children, little tiny Boys and Girls, Sons and Daughters, cast off, and thrown away like old rag dolls…. They are people who have feelings and all they want is Love, from anyone! To be giving the gift of becoming Ella’s Mommy is more than I can even explain, I truly don’t deserve it… The simple idea that we found Nina to help us is a miracle. I am the most blessed person in the world!

Ella’s mommy, thanks so much for adding to this post. I agree, there are no words but the smile on Ella’s face says it all. I am also adopted and know first hand the effect a forever family makes in a child’s life. Thank-you and your family as well. I wish you the best and a big hug and kiss to Ella!

What a moving story! Recently, while running errands, I flipped on the radio in my truck just as a popular talk show host was describing her experiences adopting three children from other countries. I was so moved that when I got to my destination, I couldn’t shut off my truck. We have friends who adopted a special needs child from China, not knowing about his physical disability until they went to China to complete the adoption. These children are so fortunate to have people like Nina to advocate for them! Great hearts!

So true Patty. There are so many children waiting, tied up within a bureaucratic system that care nothing for the children they publicly pledge to protect. It important to put a face on this ever-growing problem. Ella’s story does just that!

A friend of mine shared your post on Facebook, and having adopted two children from South Korea, I was drawn in. Our first daughter was a healthy, well cared-for 9-month-old baby. Our second had a history remarkably similar to Ella’s. She did not languish in substandard care for as long as Ella did, but the effects of the negligence she received still linger to this day. And she was in foster care, not an orphanage!
I would be very interested to connect with Ella’s family to find out more about their journey with her, and to know another family who faced struggles with a child who faced no real medical limitations but suffered the effects of inadequate care.
Thank you for this post!

Elizabeth, I think you can use the contact info at the end of Nina’s post. Ella’s mom left a comment yesterday and I’m sure she would be more than willing to share with you. Thank-you for sharing your history as well. I am adopted but of course in much better circumstances as a newborn here in the U. S. but, I am grateful everyday for people like you who love their children no matter the circumstances of their births.

I have tears in my eyes. Thank you for sharing this story.

Thank you Gina for your kind words. Its important to get positive stories like this out there.