The Buzz on Kombucha 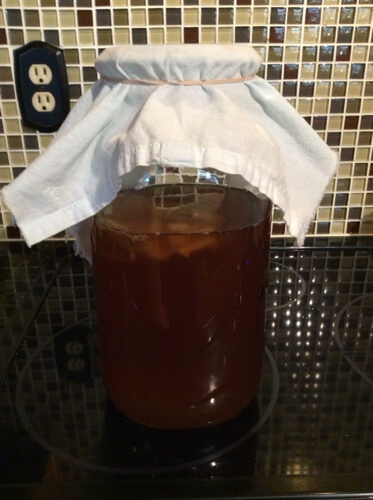 So what’s all the buzz on Kombucha lately?  This sweet and slightly fizzy, fermented tea inspires an almost fanatical devotion to the, “MOTHER” amongst cultured food advocates and seems to be fizzing up everywhere. It comes in a variety of flavors and can be purchased retail or brewed in the home kitchen. It has many pro ported health benefits as well as some negative press.  As you can imagine, all the buzz caught my attention and so I set out to find out the facts about Kombucha!

Kombucha, pronounced Kom “Boo” cha is made by fermenting tea and sugar with a kombucca culture.  The culture called a SCOPY, the acronym for symbiotic culture of bacteria and yeast feeds off the sugar producing a slightly tart, effervescient tea. As each batch of tea is replicated, so does the SCOPY which can be peeled off to produce starter offspring SCOPY’s to pass on to others.

In fact, that is how I got my “baby” SCOPY.  I struck up a conversation with someone in the line at the grocery store.  One thing led to another and I’ve now joined the ranks of culured food enthusiasts. Thanks Lauren and Ben!  See, sometimes its pays to talk to strangers!

But if you think all the buzz around the popular drink is just another latest trend, think again.  Various forms of Kombucha have been around for thousands of years. The drink is said to have probably originated in ancient China or Japan. One such story says the Japanese emperor was cured of his illness by drinking the tea brewed by his Korean physician in 415 AD. Legend says his name was Kombu and the drink was named Kombu-cha(tea).

The recorded history of the drink originated in the Ukraine in the late 19th century where it was known as “Mushroom tea” or Kvass.

The brewing of Kombucha enjoyed a resurgence in the early 1990’s amongst HIV patients with the claims of strengthening the immune system against the onslaught of the AIDS virus. However there were several incidents of negative press with the death of two women in 1995 who were avid Kombucha drinkers.  Both died from severe lactic acidosis, hence the recomendation of no more than one bottle per day for a normal healthy adult.

The fermentation process does produce very low levels of alcohol, less than 0.5.

Health benefits are strictly anecdotal and include:

My first impression of Kombucha was of a tart, sweet, slighty fizzy tea and I liked it immediately.  So much that I am eagerly awaiting the first fermentation of my own batch and look forward to bottling next week.

Is Kombucha for everyone, absolutely not.  Some people are immediately turned off by the SCOPY culture appearance and process.  But, if you are like me and are joining the ranks of people concerned about the growing number of intestinal and digestive problems of the modern day world, take a second look at a an ancient remedy to improve the overall health of your intestinal flora. Let’s try and reverse the trend of the, “sterile gut”, and who knows you might even like it.

If you would like more information of Kombucha and other cultured foods, I highly recommend Donna Schwenk’s, Cultured Food Life. 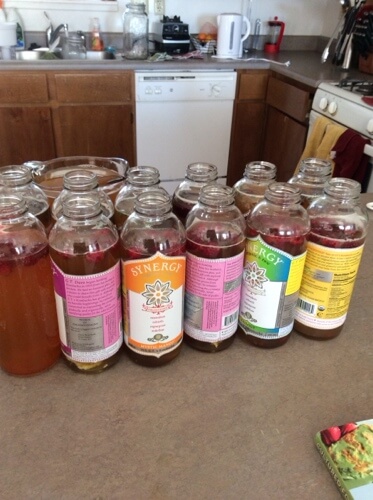 This is a great post! Thanks for the info =]