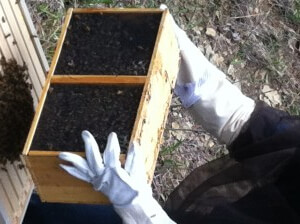 It was early March in Kansas and most of us had hoped to trade in our snow shovel for a garden trowel. A few brave daffodils and crocuses had managed to poke their heads up through the earth, a sure sign that spring was about to return.

Wanting to shake off the winter doldrums, I’d signed up for a beekeeping course. I had been reading a lot about the plight of the honeybee and its importance in the pollination cycle. The classes were close by and spread over two subsequent weekends. I was available so I thought, why not? I wanted to learn all I could about bees as I planned to keep bees SOMEDAY.

Well someday came a lot quicker than I expected. By the end of April, I was picking up a package from Joli and Cecil Sweeny and driving home with mesh cage of buzzing bees in the back seat, all the while wondering what I’d been thinking?

I’ve worked in many a life or death situation during my stint as an ER nurse. I’ve trained and ridden horses, (some unpredictable and a few downright naughty). But dumping a package of agitated bees into their newly assembled hive ranks right up there as one of the more adrenalin producing experiences I’ve had.

My friend and fellow beekeeper, Mark French agreed to help me install the package of bees. Armed with information from the Northeast Kansas Beekeeping Association(NEKBA.org) classes and a lot of independent reading, I felt pretty confident in THEORY. But theory does not replace the reality of 3000 angry flying insects who’ve been traveling for days on a trailer. They are hungry and really need to go to the bathroom. Did you know bee leave their hive to defecate? I didn’t. Until I got bee poop all over my brand new gloves. Hey, California to Kansas is a long way to hold it!

Elena the Queen bee, I know I wasn’t supposed to name her, but she is Italian and quite beautiful is kept separated from the rest of the hive snug in her own little cage. She will remain there until every bee in the hive has touched her or touches another bee who has done so. This allows the hive to accept her as their queen.

Despite my misgiving, the bees took to their new hive with hardly a glitch. They settled right in to their new home and went about the business of being bees. As for me, I realize that like most things, the more I learn, the less I know. And the bees seem more than willing to teach me the ART of beekeeping.

A package of bees arrives in a mesh wire side wooden box early spring. 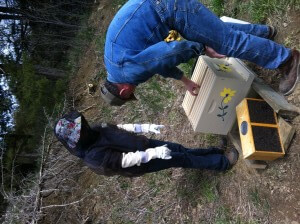 Removing a frame from the middle of the hive body makes space to suspend the queen in her cage for the first few days. The worker bees will feed and care for her during this time. Acceptance of the queen occurs after the caretaker bees pass along her pheromones to each member of the hive, cementing their bond. 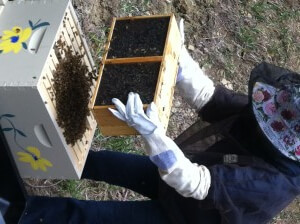 The bees are literally dumped into the hive body. It’s pretty exciting and a lot different from just reading about it! 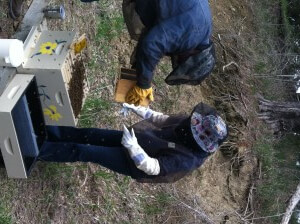 It’s best to have an experienced beekeeper to assist. Thanks Mark! 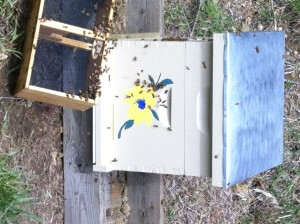 The few remaining stragglers made their way in before dusk.

This was a joy to read. I am so reminded to stop and smell the flowers! Or, at least watch the bees do their thing……

Thanks Barb, that is what I like about bees.They make you slow down and focus on the little things.

How neat! I bet the honey is delicious! I love that you’re doing this!

Thanks Sam, I hope you continue to follow my posts.