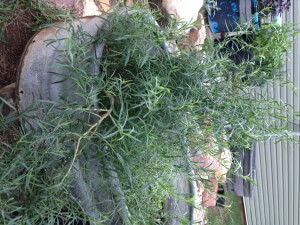 French Tarragon is a perennial herb that tolerates both poor soil and neglect. It is easy to grow and hard to kill. It’s definitely my kind of plant. I’ve had a lot of luck growing this plucky herb all summer. Tarragon is easily divided and replanted. In fact, many of my friends have left the farm with bunches of the separated roots to transplant into their own gardens.

French Tarragon is prized for its aromatic hints of fennel and licorice. Tarragon, along with parsley and chives is one of the three components in fines herbes, often used in Mediterranean cuisine. Its coarser cousin, Russian tarragon has an inferior flavor and is not cultivated for culinary use.

French Tarragon is believed to have originated in the Far East and was known as the, “little dragon” for its divided root system. It’s best used fresh and loses its intensity when dried.

Tarragon is not a particularly attractive plant. As a matter of fact, it’s oftentimes mistaken for a weed. But once crushed, you will appreciate the finer qualities of this multipurpose herb.

One of favorite recipes for tarragon, I hope you enjoy it. 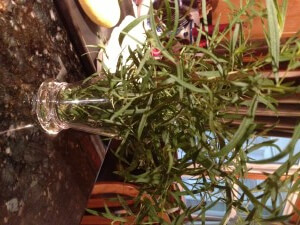 6-8 boneless, skinless chicken thighs. Salt and pepper each side.

3 slices of bacon, cut in to 1 inch cubes and cooked.

Salt and pepper to taste 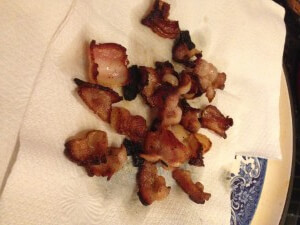 Cook boneless thighs 3 to 4 mins. each side until brown but not cooked through. Set aside on paper towel to drain.

At this point I deglaze my pot with cognac which quickly removes all excess oil. It will start to get sticky pretty quick. So watch it and be ready to turn down the heat

Pour in wine and bring to boil. Reduce by ½. You should have a dark golden syrupy liquid.

Add ¼ of fresh tarragon during the reduction phase. 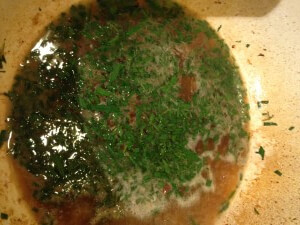 Place cooked, drained thighs back into pot and fill with chicken broth so that halfway up side of thighs is covered.

Cover and cook on medium for thirty minutes, until cooked through. 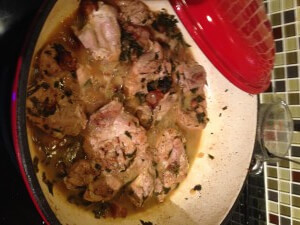 The sauce should be reduced again by half. If not remove lid during last ten minutes.

Push cooked thighs to side if pot large enough, or remove to mix in creme fraiche. 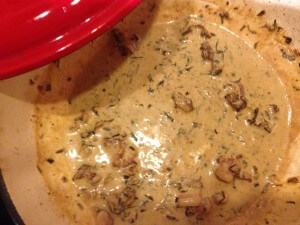 Stir in crème fraiche or sour cream mixture and heat through, about 3 mins until sauce coats the thighs. 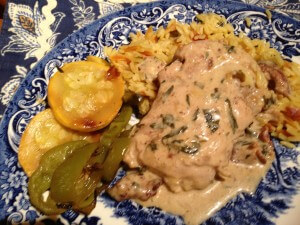 Yum, indeed and easy to make on a busy night. Or you could just eat out! Great to hear from you Erin, found another favorite restaurant in K.C. The Farmhouse. Its awesome!

I wish I could grow tarragon like yours! I do a lot of French cooking and tarragon is an essential herb for that, but I think it’s too humid here for it to thrive. Might try it in a container and see how it does.

Julie, I love tarragon as well. Try it in container, I have the most success with it in a old metal water trough. Tarraagon a divided root system so it grows tall and bundled but not as invasive as the mint family. Otherwise, it’s pretty humid here as well, the heat doesn’t seem to bother it. In the winter, we just put compost on it comes right back in the spring. Good Luck