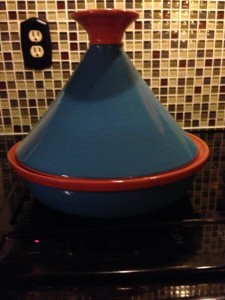 A tagine pot is traditionally used in Moroccan cooking. This two piece earthenware vessel consists of a shallow bowl and a dome shaped lid made from glazed clay. Moisture condenses in the conical section of the lid and drips back into the food. Condensation greatly reduces the amount of liquid required to turn out tender and succulent meats and vegetables. Since the tagine was traditionally used in desert climates where water was oftentimes scarce, the ability to collect and recycle excess moisture was considered a plus. The dual use of the shallow base as both cooking and serving dish suited the needs of the nomadic tribes as well.

The word tajin is Persian in origin and refers both to the style of pot as well as the cooking method. Traditional tajin cooking is done slowly over coal. Meats, (usually lamb) fruits and vegetables combined with a variety of Moroccan spices are simmered slowly resulting in a rich savory stew. 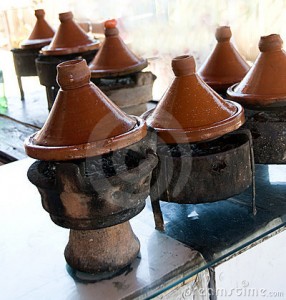 Modern day tagines are constructed using an assortment of materials from clay, ceramic glazed to cast iron. Each vessel comes with specific manufactures advice and when followed are well suited to contemporary cooking methods.

My tagine is clay with a ceramic glaze from Le Souk Ceramique. http://lesoukceramique.com/. It’s important to season the tagine prior to use to ensure the safety of both food and to prevent the pot from cracking. With a bit of preparation and care, your tagine will quickly become a favored cooking method for many years to come.

How to Season a Tagine

1. Soak the base and lid in water overnight.

2. Drain the water and allow it dry completely.

3. Rub interior of lid and base with a light film of olive oil. This is especially important in the unglazed version.

4. Place the tagine in a cold oven and preheat to 300 degrees. Leave for two hours.

5. Turn off oven and allow tagine to cool in oven. You may notice some cracking on the exterior ceramic glazing. This is not a problem unless you see large flaking, then call your manufacturer.

6. Always wash your tagine by hand, dry and reapply a light coating of olive oil before putting away.

If using a ceramic cooktop like I do, you must use a diffuser. These usually consists of a circular aluminum coil that diffuses the concentration of heat away from the bottom of the pot. They can be purchased a variety of cooking outlets as well as Amazon.com. However, Tagines are well suited for the gas cooktop.

Personally, I just place my tagine in the oven at 325 degrees, put on the timer for an hour and walk away untill done. 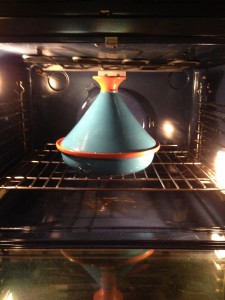 The following is one of my favorite recipes for cooking in the Tagine. 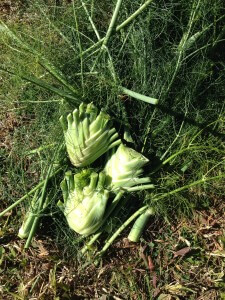 1 large fennel bulb, sliced or 3 small of my homegrown bulbs.

Salt and pepper chicken thighs and lightly brown in 3 Tbsp. olive oil approximately 4 min each side. Longer if using bone-in.

Place sliced onion in bottom of Tagine. Set browned thighs on top off onion and place a slice of lemon on top of each piece.

Place sliced fennel around chicken and sprinkle with black olives.

Stir spices into chicken broth and pour in around layered mixture.

Sprinkle in saffron threads and paprika to taste. 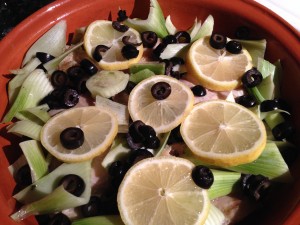 Place in oven and cook for 50 minutes. Carefully check meat after fifty minutes. If using bone-in, may require additional ¼ cup broth and longer cooking time. At this point, sprinkle with fresh coriander and or fennel fronds in final ten minutes of cook time.

Remove from oven and allow to rest for 10 minutes with lid on. The dish will continue to cook so don’t overdo adding extra liquids as condensation will run down into food. It really depends on the thickness of your meat. Less is better, you can always add more. I find ½ cup broth works well with six boneless thighs.

Remove lemon slices before serving. Suggestions for sides include couscous and or jasmine rice. Enjoy! 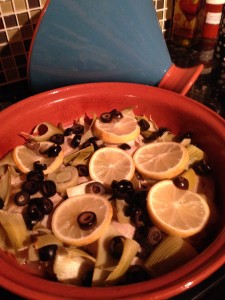 You got am extra portion of beauty brains and good old common sense!! Love you and love your blog!!

Thanks so much for your kind words. That means a lot coming from you!

Was happy to find this recipe. Got this cooker from my nephew, am going to start using it for Sunday dinner. My mind is racing with all kinds of recipes, Thanks for posting!

Can you recommend a tagine cookbook that’s primarily for baking in the oven (not stovetop recipes).

Hi Lorraine, I don’t use a specific cookbook, just recipes that require long slow cooking. I recommend bone-in meats. I cook a lot of wild game, like rabbit and venison and the added moisture seems to help with the gaminess that some do not care for. I find it ideal for osso buco that can take the stewing technique the tagine pot reproduces. Good luck and have fun experimenting.