La Trucha, the Journey, the Fish, the Friends

I set the hook and an explosion of silver erupted midstream. I was standing hip deep in the swollen, glacier waters of Argentina’s Rio Santa Cruz. The strike was subtle, a barely perceptible change in line tension, a legendary Argentine Steelhead was on the other end of my line. I’d spent my life fishing for Largemouth Bass and Crappie and feared my lightweight rod and reel would prove too small for the job. The seagoing trout fought hard but came ashore after a ten minute battle. He would become the main course at a communal dinner later that evening.

The river holds good populations of Rainbow Trout too, and was recently stocked with Chinook salmon. In the late 19th century, trout were introduced to the area by immigrant sheep and cattle ranchers as eggs from British and North American stocks. The Rio Santa Cruz is about 450 kilometers (300 miles) long and is fed by Lakes Argentino and Viedma and the annual ice melt of several glaciers located along the border of Argentina and Chile. The river flows west to east across the Patagonian Steppe, through enormous estancias (ranches) to empty into the Atlantic Ocean at Puerto Santa Cruz.

I came to find myself 7,000 miles south of my Kansas home, fishing for a species I only read about, after a 2004 family vacation to Argentina. Our friend Jorge Vega shared a photo of his son holding twelve pound salmon he’d caught. Jorge, a graduate of Fort Leavenworth’s Command and General Staff College, invited me to visit the region and fish for what the locals simply call, “La Trucha. (the Trout). I jumped at the offer and in February 2005, I journeyed to the town of Comandante Luis Piedrabuena at the end of the Southern Patagonia summer.

Jorge introduced me to two of his Argentine Army NCOs who were fishing fanatics and would serve as guides. We quickly became friends and despite my poor language skills, Toro (Bull) and Perro (Dog) taught me how to rig the tackle and the techniques to counter the swift river currents. Perro ties the large, colorful, streamer-style flies by hand.

I’ve been fortunate enough to make five additional trips and discover something new each time. I really enjoy my time there and have gained many local friends. A couple of my U.S. friends have braved both the distance and the rugged conditions, making the trip with me. The fishing, the expansive vistas, and most of all the great companionship make the trip worthwhile. The regional food centered around fish and lamb is fantastic!

The Rio Santa Cruz is influenced by Atlantic tides for its final 50 miles. The wind blows constantly 15-20 miles per hour making fishing difficult but not impossible. When you have a calm day, it’s incredibly beautiful. The fishing season runs from November through April. A license issued by the provincial government is required. Certain areas of the river are closed for fishing each season, or are catch and release only. So be sure to use a qualified guide or check with the local police for any restrictions. Steelhead is the river’s top attraction and Argentina’s annual National Trout Festival is normally held on the Rio Santa Cruz in March. 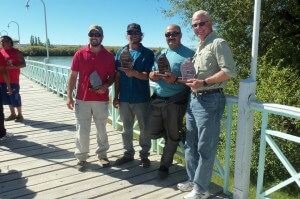 1st place in Spinning during the 2013 Tournament, Perro on my right won 3d place in the Fly Fishing category

Except for a narrow strip of greenery along the river’s flood plain, the land is semi arid with low brush and grasses. The main products of the region are sheep, cattle, minerals, natural gas, and oil. Tourism has increased as word of the region’s many outdoor activities has spread. A gift from the Nature Conservancy is a large estancia along the coast. It opened as Argentina’s second coastal national park, Parque Nacional de Monte Leon. The park is home to puma (mountain lion), large herds of guanacos (related to a camel), niandu (a flightless ostrich-like bird), fox, penguins, sea lions, and a seasonal migration of whales and dolphins.

Southern Patagonia is a challenge to get to, but worth it. You will need to fly into either El Calafate or Rio Gallegos via Buenos Aires. You don’t have to be particularly wealthy to make the trek. The stunning vistas and abundant wildlife are free for all to enjoy. There are plenty of motels, hostels, and campgrounds for those wanting to pinch pennies or if you prefer, there are a number of luxury lodges. You can make the Intra-Argentina connections on the same day, but a day or more stopover in Buenos Aires is highly recommended. The dining and shopping opportunities in the, “Paris of South America,” is not to be missed.

You make me cry,beautiful memories
it was our pleasure your visit and you’re always welcome!!!!!!!!

Our visits to Argentina are always wonderful but the best part is the many friends we’ve gained!