Is Ginger Really Good For What AILS You? 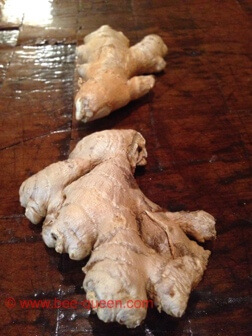 I confess. I am a foodie! I love to cook, try new recipes and restaurants. But, most of all, I love to eat! So, when I suffer from digestive issues, it really bums me out.

Earlier this week, I was feeling a bit peckish. Yes, I know that sounds pretentious but, peckish is a term that describes exactly how I felt. You know, that feeling of hunger and then when do you eat something, it turns your stomach. Yuck, Nothing worse. Especially this time of year with the holiday parties and in my case, the holiday baking.

So, what’s a Bee Queen to do? In the past, I might have reached for the bottle of pink, chalky medicine, chewed a tablet and or horror of horrors downed a purple pill. But now a days, that thought did not occur to me. Instead, I boosted my intake of fermented products like Kefir, Kombucha and reached for the ginger root.

Yes, I said ginger root. A rhizome of zingiber officinale commonly used for a spice and medicinal remedy for nausea, indigestion and IBS symptoms. Yes, your mother was correct in giving you ginger ale for nausea. This wonderful little tuber is not only useful in spicing up your culinary endeavors but is an all around natural remedy for many health issues.

A few contraindications to ginger are:

It turns out, ginger may have some cancer fightlng abilities. Research in the efficasy of ginger in the prevention and treatment of colo-rectal cancer has been promsing. But, don’t take my word for it. Even Web.MD, a resource site normally loathe to tout any natural alternative states,”ginger supplements appears to lower some indicators of inflamation in the colon.”

Ginger ale has been around since the 1840’s. But, it was probably no more than sugary water with a little ginger-flavoring. Vernors is touted as the oldest commercially prepared ginger ale and is still available today.http://www.drpeppersnapplegroup.com/brands/vernors/

As the story goes, pharmacist, James Vernor experimented with ginger ale in a barrel of his barn in 1862. He was called away to fight in the Civil War and  upon his return in 1866, he discovered the intact barrel contained a, “Golden elixir,” and thus, Vernor’s Ginger Ale was born.

Canada Dry’s carbonated version was produced in 1907 to accomodate Prohibition. The dry revolution began and Ginger Ale  is still served as a remedy for upset stomachs in hospitals across the nation today.

It turns out, growing ginger at home is not that difficult. I was able to grow this ginger plant from planting an organic ginger rhizome bought from the grocery store. Just make sure to buy organic, as non-organic ginger roots have been sprayed to prevent leaves and shoots from sprouting. Not only is it a beautiful plant but, the rhizomes once harvested can be divided again and the plant replicated. An endless supply of your very own organic ginger! 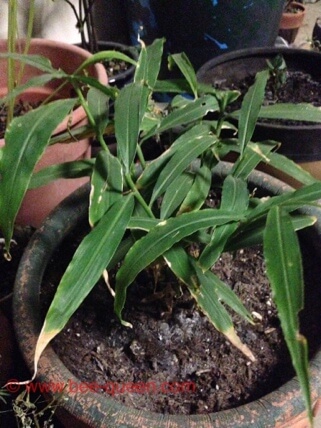 So, take a look and an old favorite spice and brew up a slice of ginger root tea. It is good for what ails you!!