Here We Come a Wassailing 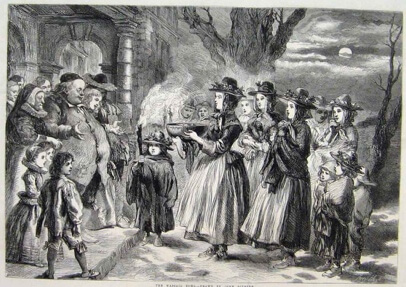 You’ve heard the song year after year. And you probably know many of the lyrics. But do you know the story behind the Wassailing song?

The Wassail cup or bowl was traditonally a large bowl made of pewter or silver, oftentimes referred to as a loving cup. It was communal bowl shared amongst the inhabitants of a village to celebrate the New Year or during the twelve days of Christmas. The tradition can be traced back to a Saxon custom in which the Lord of the manor would offer a toast with, “Wase Hael,” meaning ,”Be Well. The crowd would respond with a,” Drinc Hael,” meaning, “Drink and be Healthy.”

Various recipes of wassail have existed over the years but the most traditional mixture included strong ale and spices, mixed with apples, sugar, eggs and cream. A few pieces of toast floating on top gave the mixtue the appearance of lambs wool, a name wassail was oftentimes referred as. Doesn’t sound very appetizing, does it? But, Wassailing has been an English tradition since the 1400’s. It was often seen as a way to bless the coming years apple crop.

A Wassail cup that holds 10 gallons of wassail is owned by Jesus College at Oxford, University. Needless, to say the drinkers from such massive cup imbibed in much general merriment and intoxication. Wassail traditons continue across England today.

By the 1600’s, wassailers were going from door to door offering a drink of the potent ale and demanding some form of small payment for their offerings. Refusal of payment did not bode well for the homeowner. And as you can imagine, it didn’t take long for the spirit of wassailing to dissolve into the spirit of “misrule.” Our Purtian forefathers quickly put the ka bash on this form of celebration in Colonial America. Although some form of wassaiiing did exist until the 1930’s amongst the street beggars of New York City.

Today, memories of wassailing is more associated with caroling and the lyrics we sing on New Years Eve.

But, if you are so inclined to experiences the scent and taste of Wassail this hoiday season. You might enjoy this traditional wassail recipe.