I attended a talk on bees last night at the Parkville library by Christine Shuck, a fellow beekeeper. While we might have varying opinions on beekeeping, we both agreed on one thing, bees are incredibly productive and amazing creatures. A creature for whom every moment of life counts.

I’ve had several people ask me,”Why bees?” Again, just like beekeeping, there are various reasons as to why people keep bees. Pollination is chief amongst them. Christine spoke of the increased abundance of her organic garden produce, once she started keeping bees. Others, might want the honey crop. I admit, both these reasons played a deciding factor in my decision to take up beekeeping. But for me, the more I learned about bees, the more my admiration grew for the bee’s innate sense of industry and purpose.

From the time the worker bee crawls out of its cell, the one day old is busy. As a matter of fact, her first job is to turn and clean out the cell she was born in, essentially preparing it for the larvae that will replace her once her six week life span is complete.

On days 3-11, she will become a nurse bee to the immature larvae. Remember the queen is laying about 2000 eggs per day, so the young worker bee is kept busy bringing food to all the hungry infants.

During days 12-17, the worker bee begins to produce wax and is put to work building and repairing any damaged cells. She will receive the nectar and pollen brought in by the forager bees and pack the pollen into the clean and repaired cells. Also during this time, the young bee must provide continuous food and care for the queen. (Not too different from a mom’s duties during the holidays, eh?) Remember, that in order for the nectar to become honey, the humidity levels must be reduced to below 21 percent, so the worker bees fan the hive to keep it out a near constant 95 degrees day or night.

By the 18th day, the worker bee has been promoted to guard duty status. Her job is to guard the hive entrance and chase away any marauding invaders such as wax moths, hive beetles, skunks and two large black bears disguised as Labrador retrievers by the name of Hondo and Clara. 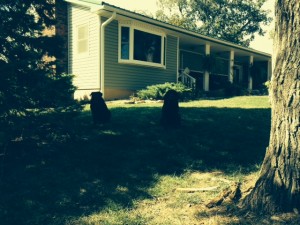 On or around her 21st birth-day, the worker bee is promoted to the status of forager. Foragers are some of the oldest bees in the hive and they are tasked with the arduous duty of collecting and bringing pollen and nectar back to the hive. And just to refresh your memory, foragers can range up to a two mile radius. During the spring honey flow the pollen laden bees will approach the hive landing platform with all of the grace of a cargo heavy container ship floating low in the water.

The forager bee continues these duties until her lifespan is complete, confident in the knowledge that her part in the cycle of bee life will enable the hive to survive and flourish.

The bees have become an inspiration to me. When I feel fatigued or aggravated with my lack of, “getting things done,” I think of their single-minded work ethic and how much they accomplish in a relatively short span of time. And like the infantry, I just put one foot in front of the next and carry on.